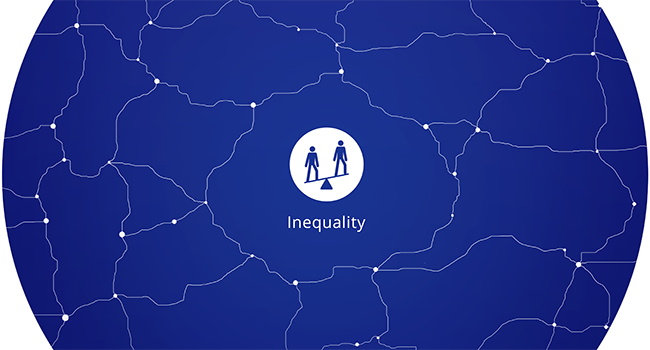 Research shows that different forms of inequality is a predictor for almost all things bad: It worsens crime and violence; it is a predictor for disease, and social tensions run higher in unequal societies. Inequality also structures the ability to move or stay put. In some regions, those worst off are not able to gather the resources required to move, and therefore forced to remain despite the lack of livelihoods, while others, depending on their societal class can treat migration or its facilitation as a family investment strategy on par with agriculture or education. Developments like resource extraction, environmental degradation, but also gender and sexual discrimination, corruption and state violence may either cause or exacerbate such inequalities as well as be caused by inequalities. Inequality is also at the core of transformations of global and national labor markets dominated by parallel processes of brain and care drain, precaritization, extreme exploitation and marginalization of certain groups.

Marlene Spanger works on mobility and governmentality from below and above. Researching sexual commerce, labour market and anti-trafficking she focuses on how subjects are governed through gender, sexual and racial formations, and how various actors condition the mobility of the migrants.

► Social Justice for All: Linking Human Rights, Development and Violence in the City: Contributing to
Safer Cities (2017)