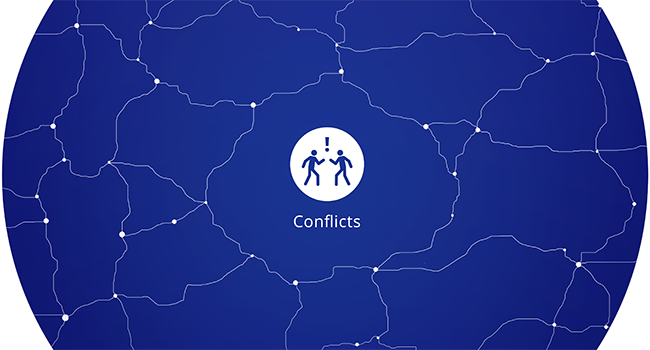 The overarching goal of the modern refugee regime is to provide protection to individuals forced to flee their homes because countries are unwilling or unable to protect them. As international -, regional - and internal conflicts are the most frequent source of displacement, understanding the role of conflicts as well as the dynamics and what it produces; economically, politically and socially deems to be a central part of understanding issues concerning refugees and their situation. Conflict-prone areas produce not only displacement but also refugees in a historically unprecedented number. Conflicts are therefore a central area of interest in studying refugees and displaced people. Conflict should here be understood in its broadest sense ranging from violent armed conflicts such as; ethnic -, religious- and political conflicts to conflicts related to issues of oppression leading to displacement “based on the principle that human beings shall enjoy fundamental rights and freedoms without discrimination”. An additional aspect also related to the topic of conflict deals with violence. Why do people engage in violence and what is the effect of violence in terms of displacement and lost livelihood? Research on violence focusing on both perpetrators and victims are central themes dealt with within our team of researchers.

Steffen Jensen has worked on conflicts for most of his professional career. This includes focus on the relationship between gangs, police and vigilante groups, torture and ill-treatment, histories of victimhood and violent mobilization and radicalization. In 2017 he carried out new rounds of fieldwork in Manila (on the war on drugs, corruption and violence) and in Cape Town (on mobility, belonging and violence).

► The Morality of Corruption: a View from the Police in Philippines (2017)

► Corporealities of violence: rape and the shimmering of embodied and material categories in South
Africa (2015)

Bjørn Møller has looked into the way armed conflicts take many forms. During the Cold War the absence of “hot” war came at the expence of an ever-present risk of large-scale war, giving rise to various alternative strategies for war prevention, including non-offence strategies. The “War on Terror” launched by the United States in 2011 has legitimised the use of armed force against countries merely suspected of alignment with terrorists. Another and more convincing motive for war has been the emerging norm of “R2P” (Responsibility to Protect).

► India and the Responsibility to Protect (2017)

Anja Kublitz’ research is driven by the overall question of how conflicts move across space and time and forge new political subjectivities. Since 2005 she has explored these questions through studies of Middle Eastern refugees in Danish housing projects. In her FKK funded research project “Escalations: A Comparative Study of Accelerating Change” she studies the effect of the Arab Spring among Danish Muslims.

► Escalation: Towards a Theory of Sudden Accelerating Change (2018)

► From revolutionaries to Muslims: Liminal Becomings across Palestinian Generations in Denmark
(2016)

► The Cartoon Controversy: Creating Muslims in a Danish Setting (2015)

► Seizing Catastrophes: The Temporality of Nakba among Palestinians in Denmark (2013)