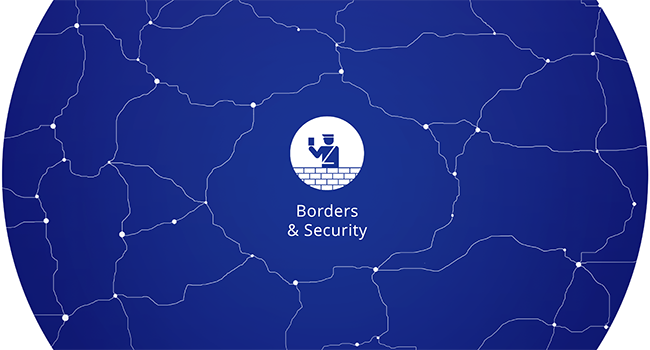 Many states frame their border politics as a question of security from threats like trafficking, arms trade and terrorism to the arrival of “illegal immigrants”. Also, due to technological developments like drones, biometrics, virtual databases and automated systems, border control has become a lucrative emerging market for the arms and security industry. Both of these developments have implications for the humanitarian responses towards people in need, as they may link up with nationalistic actors´ calls for strengthened border controls. Concurrent with the militarization of many of the world´s borders, the number of people losing their lives trying to cross them has also increased manifold over the last decades. Security at the border is a part of larger developments around security and state formation in relation to policing a host of global, regional and local conflicts like for instance wars on drugs, crime and terror on the horn of Africa, in Latin America and Asia as well as in the Global North.

► Human Trafficking as Lever for Feminist Voices? Transformations of the Danish Policy Field of
Prostitution (2011)

Anja Kublitz has for a decade studied security from the perspective of the securitized themselves; namely second generation immigrants from the Middle East who by the Danish state are targeted as radicals, gang members and/or foreign fighters. In her AAU talent program “Affective Events: An Anthropological Study of the Social formation of Danish Foreign Fighters” she studies the becoming of Danish jihadists.

► The Rythm of Rupture: Attunement among Danish Jihadists (2018)

Bjørn Møller has worked with how neither internal or external borders are facts of nature, but politically created—often as a result of wars. Moreover, borders are rarely fixed, but always up for negotiation and change—and they often create what Foucault called “heterotopias,” as is the main theme in “Refugees, Prisoners and Camps.” At sea borders are particularly “fluid,” a fact which pirates exploits and which hamper counter-piracy operations, as explained in the two articles on piracy.

► Refugees, Prisoners and Camps: A Functional Analysis of the Phenomenon of Encampment (2014)

► Militaria and Piracy in the Horn of Africa: External Responses (2013)

► Soldier, Sailor, Poor Man, Thief. Pirates, States and Navies from the Days of Yore to the Present (2012)

► National, Societal and Human Security - A general Discussion with a Case Study from the Balkans
(2000)