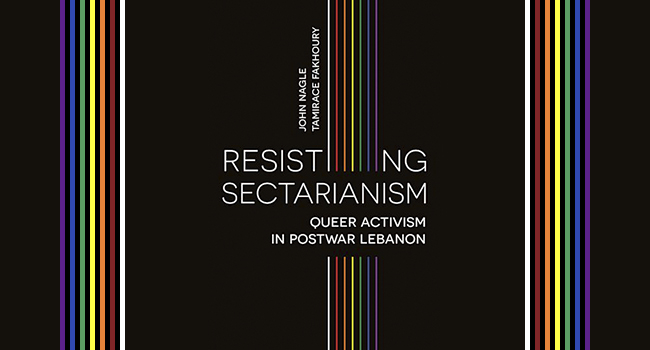 The new book by Tamirace Fakhoury (co-authored with John Nagle) was published in August 2021 and it investigates queer movements in Lebanon.

Associate ProfessorTamirace Fakhoury, Aalborg University and Professor John Nagle, Queen’s University, Belfast, have written a book providing an insight into the politics of feminist and LGBTQ activism in the context of Lebanon's postwar sectarian system.

The authors argue that LGBTQ and feminist social movements are powerful agents of political and social transformation in Lebanon.

There will be a book launch event in Belfast in spring 2022.

Here, at Aalborg University, Tamirace Fakhoury has answered some questions about her newly published book.

- What was your motivation to write this book about Lebanon’s queer movements?

"There is little research on the interaction between the politics of sectarianism and queer activism in Lebanon. We contend that, in order to study Lebanon’s politics and its impact on ordinary citizens, it is essential to abandon an analytic prism focusing on sectarian communities and to embrace a perspective that explores the nexus between political sectarianism and various non-sectarian groups such as women, LGBTQ communities, refugees, migrants, etc. Through this book, we wanted to shed light specifically on the plight of LGBTQ communities and deconstruct the idea that they are helpless victims, highlighting their agency and their capacity to challenge the system through various means of mobilization rooted not only in political activism but also in art, literature, and discursive engagement with power differentials."

- What is the contribution of the book to academic literature?

"This book openly addresses the relevance of queer politics in the Lebanese context, and broadly in the Middle East, positioning queer movements as key political and social actors that challenge political governance. The book also contributes to the literature by acting as a platform whereby the narratives and political imaginaries of LGBTQ communities speak for themselves, without constant (re)interpretation."

- How do you see the future of queer activism in Lebanon?

"I think that we should distinguish between a short-term and a long-term future. In the short term, it is important to understand the current nexus between economy and activism in Lebanon. With the collapse of Lebanon’s economy, the economic livelihoods of LGBTQ activists are dwindling, and there is a particular scarcity of safe spaces where they can mobilize and express their grievances, as well as position themselves as powerful policy actors. However, in the longer term, we argue that queer political imaginaries in Lebanon will undoubtedly shape and reshape the politics of sectarianism. Therefore, we consider that LGBTQ activism should not be seen through the binary of success and failure or through the lens of short-term temporalities. Instead, LGBTQ communities deploy through their everyday acts of resistance long-term “queer projects and imaginaries” that are bound to reshape policy and politics."

The book can be purchased here