On 11 - 13 December 2019, assistant professor Martin Lemberg-Pedersen from Global Refugee Studies’ research group hosted a postcolonial conference with a global migration focus. The conference brought together different scholars from a variety of disciplines as an attempt to communicate across disciplines and geography and bring about a re-historicization of postcoloniality. This conference report brings a short overview of the conference presentations.

The first keynote speaker at the conference was Dr. Lucy Mayblin, senior Lecturer in Sociology from the University of Sheffield. Her presentation investigated neglected literatures in British colonial history to illuminate how postcolonial narratives still influence the British asylum system today. Mayblin unravelled four silences in narratives about the postcolonial history to show that colonialism has a narrative focus on European history rather than colonial history and therefore, tends to be more tolerable to some citizens than others.

PhD Peter Teunissen’s presentation explored concepts of the EU deportation regime by focussing on corridors of removal. Teunissen argued that colonial structures are still ongoing: EU still frames deportation as a crucial tactics, and the discourse of crisis and security is still ever-present. Further, EU deportation policies also holds a focus on nationality, where migrants get classified on behalf of their nationality and immediately detained if they belong to certain categories.

Research assistant Mathias Tjønn gave the third presentation at the conference on the long-term influence on a short-term colony in the case of Italy and Libya through an investigation or border management. Further, Tjønn explored the role of oil: Something Italy has earned largely from due to postcolonial structures. The presentation also showed how a continuity of practices of detainment, containment and slave-like conditions are still present in today’s EU-Libya relations. 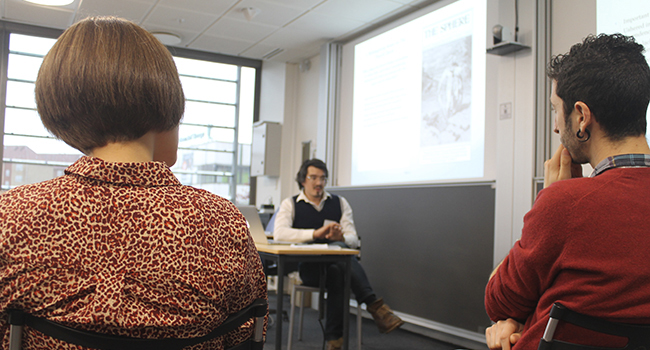 Penny Koutrolikou from the School of Architecture, National Techincal University of Athens described how the EU discourse on migration has been framed through care and support for the migrants alongside deportations, deterrence and transit. In this process, the EU provision of aid to external countries in order to stop migrants from crossing the EU borders has been central. Koutrolikou focused on Afghanistan as a place where a lot of deportation from EU countries has been ongoing.

The presentation given by Clayton Boeyink, PhD from the School of Political Science in Edinburgh was an investigation of Tanzania and Sierra Leones’ legal system through two case studies. Sierra Leone exemplifies a trifurcated state with three legal systems working alongside each other. The presentation showed that foreign political anti-colonial context is filled with confined policies.

Kate Pincock, research associate from the University of Oxford held her presentation on postcoloniality in the context of LGBT refugees and queernes in Kenya. In 2013, Kenya passed the anti-homosexuality bill and voted to uphold its 1897 colonial penal code that made same-sex activity punishable by 14 years of imprisonment. As a result, LGBT refugees from the Kakuma-camp formed a group in order to put pressure of UNHCR, who works with the Kenyan stats, but at the same time position themselves as LGBT friendly. Pinoch criticised UNHCR’s indirect involvement in acts of structural violence.

Felicity Okoth, Consultant at the African Migration and Development Policy Centre in Nairobi, gave a presentation on refugee management in Kenya and hierarchies of race. She emphasized how race remains central to postcolonialism, border externalization and encampment, since the colour of bodies reflects a hierarchy in mobilities where black bodies are easier encamped than white bodies. 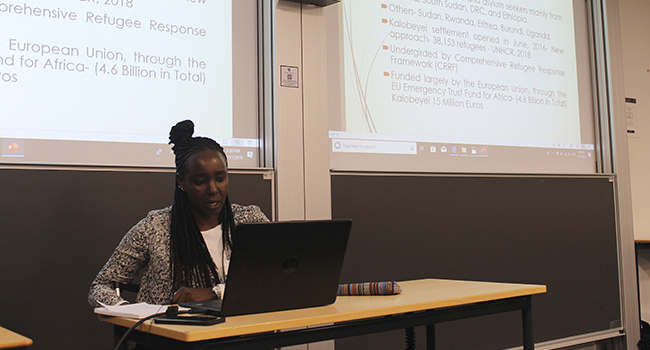 A presentation was then given by Roberto Rodolfo Georg Uebel and Amanda Raldi, PhD students from the University of Rio on Brazilian foreign policy for migration. They investigated how constructed and artificial realities (hyper-realities) has transformed the agenda of Brazilian immigration policies. This has led to a xenophobic discourse of migration as well as a national conservative identity shift in Brazilian society. 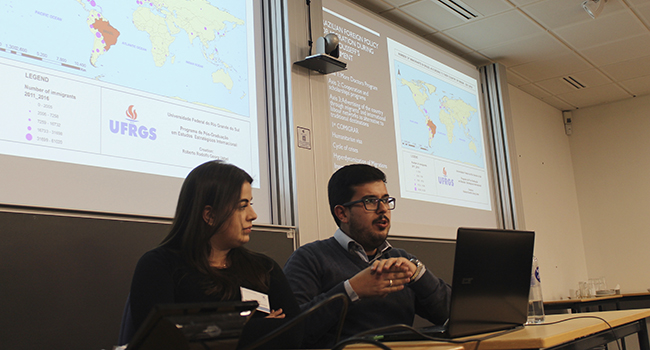 The last lecture of the first conference day was keynote speaker Rosanne Adderley, associate professor from Tulane. She investigated ways in which the British naval “saved” slaves with African descent from ships from Brazil or Cuba, only to guide them back to the UK and let them live in slave-like conditions. The Africans were working for white Brits but had some independent economic activities, which placed them somewhere in-between slavery and freedom. Even though Britain likes to think they liberated the Africans, in really, they re-enslaved them.

The second day of the conference began with a keynote by Phillip Cole, senior lecturer from UWE Bristol. Cole focused on the agency of refugees by challenging the dominant political theory approach which is structured around the nation state and makes the refugees citizens of nowhere. To encounter this perception, Cole suggested a political theory approach which recognizes capacity for refugees as agents of theory, thus providing essential theoretical insights based upon their experiences.

Secondly, Nasreen Chowdhory, PhD from the University of Delhi presented her investigation on refugee management and citizenship in an Indian context. She identified a visible ambivalence of the state towards refugees which is conditioned by the notion of hospitality that habituates humanitarian concerns.

Postdoc Nina Sahraoui presented her paper based on an ethnographic field work in Mayotte where Comorian women travelled to give birth. These women’s experiences, she argued, illuminated many implications of postcoloniality and reflects a repressive migration control which leads to continuous deportations.

Susan Reardon-Smith, academic support officer from the University of London, presented her investigation of Australia’s harsh policy response to asylum seekers as a result of Australia’s colonial history, indigenous dispossession and race relations. Thus, she drew parallels between the current treatment of asylum seekers and the indigenous Australian people, and argued that both the historical and contemporary context of colonialism has a role to play in Australia’s response to forced migration.

The next presentation was given by doctoral researcher from Aalbrog University Eva Magdalena Stambøl on EU’s internal security focus and its efforts to influence West African countries’ penal policies and practices. Stambøl argued that this behaviour can be understood as neo-colonial practices, and thus, she explored the concept of “penal neo-colonialism”.

Lastly, Professor, Sharla Fett, Occidental College held a presentation on border control and externalization based on the ways in which the U.S dealt with displaced African slaves during the transatlantic slave trade. Sharla argued that the slave trade contributed to U.S nation building while simultaneously furthering the vulnerability of young slave trade recaptives to death and trauma.

The third day of the conference began with a keynote by Martin Lemberg-Pedersen on data craving and databasing by examining to some of the key actors in the political economy of datafied EU displacement governance. By employing a postcolonial analysis, Lemberg-Pedersen rehistoricized the functionality of data extraction in displacement contexts of especially the US Atlantic slave trade. 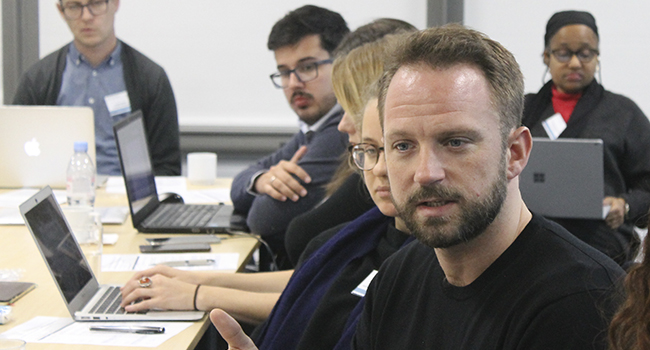 Valentina Ibeka then presented on medical and health requirements for cross border mobilities. She focussed on dominant patterns across nations that endorse health/medicine gatekeeping policies with regards to educational migrants in order to show the benefits of turning these gatekeeping practiced into viable health insurances.

At last, research fellow and doctoral candidate Lina Ewert presented her paper on new approaches to refugee protection and humanitarian surveillance practices through the case of biometric induced governing of Syrian urban refugees in Jordan. Ewert showed how humanitarian surveillance is highly ambiguous in contributing to both refugee employment as well as their potential exposure for an already marginalized group.