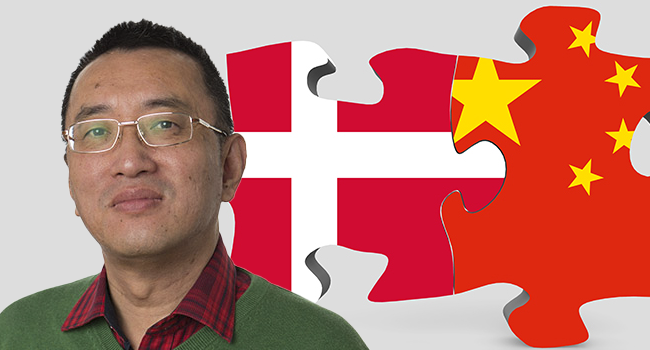 China-Denmark relation on the agenda in webinar stream

Available to stream now is last week's webinar on China arranged by Aalborg University's Faculty of Social Sciences and Djøf.

- If Chinas economy can rise from one of the poorest to the second biggest economy in the world – under the Chinese political system – we must understand how this system works.

Professor Li Xing from AAU’s Department of Politics and Society underscored these words in a presentation he gave at a webinar on Thursday the 3rd of June.

“Ligger Fremtiden i Kina?” (Does the Future Lie in China?) was the headline of the open online gathering arranged by Aalborg University's Faculty of Social Sciences in collaboration with Djøf, a Danish trade union for professionals in social sciences, business and law.

The webinar was both in Danish and in English.

Presenting at the webinar besides Professor Li Xing from AAU’s Department of Politics and Society were in order of appearance:

Here are the main points and arguments from Professor Li Xings presentation in his own words:

- China’s competitiveness in economic success and technological advance is not the essence of the problems in China-West relationships. After all the West has been benefitting from China’s economic rise, and China is emerging to be the largest consumer market for western products as well. The anxiety of the West toward China is caused by the fact that the outcome of China’s economic success and its modernization process does not conform with the basic belief system in the West on a number of causal relationships.

- In other words, the West’s sentiment of anxiety is that an “expected China” or an “imagined China” shaped by globalization, marketization, and westernization, is totally vanished, becoming hopeless! On the contrary, China is becoming a, as EU puts it, “systemic competitor”, or as the US puts it, “systemic rival”.

The time is now

- Due to an auto-denial attitude, the West has never invested on seriously studying the Chinese political system, its governance model and its state-market-society relations. Now, it is the time that the West needs to examine how the Chinese system is constructed/structured, and how the Chinese political meritocracy, the party-state dual leadership, the policy-making process, the civil servant selection and evaluation system, the self-correction mechanism, the party-population linkage, etc, are functioning.

- It is absolutely wrong to assume that the Chinese political system and its governance model are static and decay. On the contrary, the Chinese party-state system has been trying to adapt since 1949 in order to survive. The Chinese system has a certain degree of resilience after decades of learning, modifying and adapting.

The temptation of China

- The Chinese political system of authoritarian meritocracy is historically shaped and culturally unique, it is surely not a substitution to replace the Western model of liberal and electoral democracy. We should not romanticize, nor should we demonize the Chinese model. The Chinese success does not legitimize any universal relevance/significance, but it demonstrates that non-western alternatives to development and modernization do exist. The Chinese model is a tempting option that bears ideational inspiration and influence in many developing countries and regions.

- It is important for Denmark to conduct first-hand research on the Chinese political system and governance model for Denmark to be able to formulate its independent China policy. Denmark’s media and academia often apply indirect and second hand researches on China from the English speaking world. If our consensus is that our future is to a great extent linked with China in one way or another, then it is the right timing now for us to conduct serious studies on Chinese politics.

The Faculty of Social Sciences at Aalborg University has been supporting Professor Li Xing’s effort and ambition to set up a “China and International Relation” (CIR) research profile and a CIR masters program. In addition, Li Xing’s research group has been holding the editorship of an academic CIR-journal.