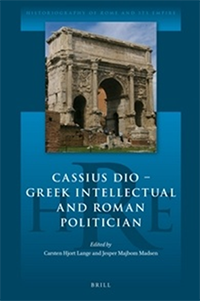 Cassius Dio: Greek Intellectual and Roman Politician, a collection of essays on this historian, is the first to appear in the new Brill series Historiography of Rome and Its Empire. The volume brings together case studies that highlight various aspects of Dio’s Roman History, focusing on previously ignored or misunderstood aspects of his narrative. The main purpose of the volume is to pursue a combined historiographic, literary and rhetorical analysis of Dio’s work and of its political and intellectual agendas. Dio's work is often used as a handy resource, with scholars looking at isolated sections of his annalistic structure. Contrary to this approach, the volume puts emphasis on Cassius Dio and his Roman History in its historiographical setting, thus allowing us to link and understand the different parts of his work.