History Book of the Year?

Associate Professor Poul Duedahl from CGS, Aalborg University, is the author of the book, Ondskabens øjne [The Eyes of the Evil], which was released in May, almost instantly became a bestseller and received a series of positive reviews in the Danish newspapers. Now the book is one of five publications nominated for the title as History Book of the Year 2016. 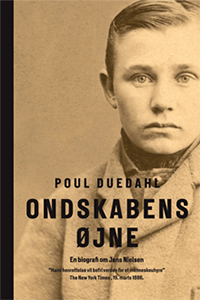 The book covers the story of Jens Nielsen, who was executed in November 1892 in the prison yard at Horsens State Prison. Since then no people have been executed in Denmark for crimes committed in peacetime. The book follows Nielsen’s life and criminal career, and explains the reason for his hatred towards authorities and how it happened that an intelligent young man ended up on the scaffold as the last victim of the executioner’s axe.

The nominees for the History Book of the Year Award are selected each year by the Danish Historical Confederation, Historie-online.dk, while the winner is selected by the book readers.

Will the prize go to CGS and Aalborg University? You can read more about the five books and make your own choice here.

Everybody can take part. The Danish Minister for Culture will reveal the winner and award the prize in March.