In this interview AAU associate professor Pauline Stoltz sheds light on her process working on a new book "Gender, Resistance and Transnational Memories of Violent Conflicts". 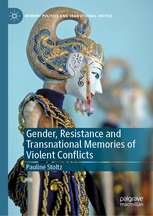 This spring AAU associate professor Pauline Stoltz publishes a book about how memories of violent conflicts that took place in Indonesia decades ago and that were the result of complex inequalities, still hurt today both in Indonesia and in other parts of the world.

The monograph, which is published at Palgrave Macmillan, puts the focus on gender and resistances to silences and denials of responsibility concerning human rights abuses and historical injustices.

In search of her mother’s story

Stoltz uses innovative transnational and gender approaches in the research fields of transitional justice and memory politics and an original approach to the narrative analysis of four major Dutch and Indonesian novels.

We asked Stoltz three questions about her book.

Can you summarize what has been your main conclusion in the process of writing this book?

- I started writing this book, since it felt as if I did not know anything about the childhood of my ‘mixed-race’ mother and the experiences that had formed her as a war child. She was born in 1935 in Indonesia and lived through the Japanese occupation of the country during WWII and the Indonesian war for independence from the colonial power of the Netherlands, which both took place in the 1940s. In 1950, she moved to the Netherlands as a post-colonial migrant, but in the Netherlands and in Indonesia, as well as globally, there are many silences  in relation to these conflicts, as well as in relation to the Indonesian genocide of 1965.

- I wanted to investigate the importance of gender and resistance to these silences and denials in the narratives about these conflicts. I suggest that the solution to the political puzzle posed in this study – why the silences and denials that relate to the memories of violent conflicts in Indonesia continue, despite an increased acceptance of global norms on transitional justice – requires that we need to pay attention to the transnational and intersectional inequalities of victims, and perpetrators as well as observers.

What have you achieved personally and professionally from writing the book?

- On a personal level, I have learned so much about how the memories of these violent conflicts, which took place in Indonesia such a long time ago, matter not only to me but also to others. I was afraid that my personal and often emotional search for knowledge about this past would be uninteresting on a professional level, since there already is much research about these conflicts, but now I think that I have developed a way of working that also is relevant to others.

- I was very happy with the initial reactions of colleagues from all over the world when I advertised the book in closed specialized groups for Indonesia research, Feminist Security Studies, memory studies, etc., on Facebook. These showed me that already after a quick glance at my approach to the issue of transnational memories of violent conflicts the thinking of people that were engaged in memories of conflicts in Asia, Africa, Latin America and Europe was stimulated. That was so cool!

Your book analyzes three conflicts from the past. Why are they relevant today?

- On August 17, 2020, it is 75 years ago that Indonesian nationalists by means of the later president Sukarno proclaimed independence from the colonial power of the Netherlands. The Dutch refusal to accept the Indonesian Proclamation of independence extended the period of violence for another four years, until the Dutch state on 27 December 1949 was forced to transfer sovereignty to the Republic of the United States of Indonesia.

- Over the decades, the Dutch state has had problems with acknowledging that there have been mass violence and human rights abuses during the colonial period and the war for independence, but as recent as in March 2020 the Dutch king Willem Alexander offered during a state visit to Indonesia an unexpected apology for past ‘excessive violence’, without beforehand having informed his government. - The Indonesian reactions have been mixed, since the Dutch king will not attend the commemoration in August 2020. The Dutch have historically warmed up to the date of 27 December 1949 as the end of colonial rule, to the irritation of the Indonesians. In addition, reactions upon how to remember the violence of the late 1940s might force the Indonesian government to apologize or take other measures to react upon the aftermaths of the genocide of 1965 upon real and alleged communists and why this subsequently hardly has been addressed. In other words, human rights issues remain a globally important issue, even if the attention of the world upon these particular conflicts remains limited.

► Read about Department of Politics and Society