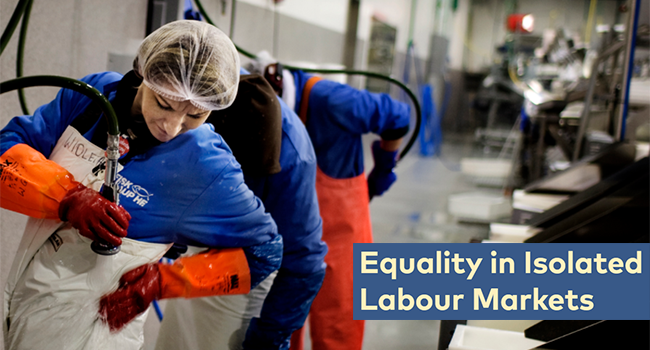 Gender equality efforts crucial for the future of rural areas

Gender is an important parameter for understanding both demographic and economic development in relatively isolated areas. How is gender equality and equal participation in paid work and care for the family negotiated in communities characterised by geographic isolation? The new report “Equality in Isolated Labour Markets” investigates these issues in places in Denmark, the Faroe Islands and Greenland.

Men and women in the Nordic countries occupy different positions in the labour market and in social structures. This new report focuses on people living and working in geographically isolated areas of the Nordic region. How do they make a living and maintain ties to locality? And how do questions of gender equality impact on work and family life decisions? The places in focus are Narsaq in Greenland, Suðuroy in the Faroe Islands and Læsø in Denmark. While different in several important respects, these places face a common challenge in maintaining demographic sustainability. They are all characterised by declining population figures, and especially young women tend to leave.

The research project is partly funded by the Nordic Council of Ministers, through the Nordic Gender Equality Fund.

The report also has a subsection specifically focusing on youth and their views, as future decisions about where to live and work for this group is highly influential on long-term demographic sustainability. What is the basis for future work life and family life in these places? Helene Pristed Nielsen, associate professor at Aalborg University, has led the study.

“A main finding is that especially young women perceive local gender roles as more constrained or pre-defined than both the young men and the older generations – with the possible exception of the older Greenlandic women, who frequently concurred that local gender roles were too traditional. Almost universally, the young women saw very few career possibilities for themselves in their local communities”, she says.

Some of the report’s other main findings are that seasonal variation in workloads is most pronounced on Læsø (which also has the most developed tourism sector), family ties are important for settlement patterns especially in Suðuroy, whereas respondents in all three locations express a strong sense of belonging in place. Respondents in Narsaq are rather suspicious of externally driven development projects, but frequently highly supportive of local initiatives, the latter also characterising attitudes encountered on Læsø. Mobility is for obvious reasons most difficult in the Greenlandic context, but nevertheless, mobility is highly significant for both work lives and family life practices in all three locations.

The report points to six lessons learned from its analyses, which may have implication both at policy level but also locally for residents in debating how best to ensure viable demographic and economic future development in their locality. One of them is “the butterfly effect”.

“In small places, change can happen relatively quickly, and even minor changes have a tendency to develop amplified effects. For example, if you close a local workplace with only two or three jobs, this may mean that two or three local families will have to move away to ensure jobs for both parents. This may bring the number of children in the local school to a critical low. Furthermore, local sports clubs and associations are typically dependent on volunteers, and if people move away, it is difficult to recruit new volunteers. People tend to have many roles in small communities and can be difficult to replace”, says Helene Pristed Nielsen.