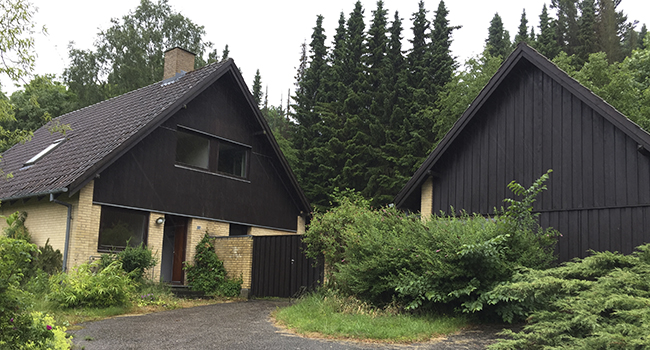 Photo: The house disguising the entrance to the REGAN Vest bunker.

Civil Defence was central to the Cold War. The provisions to defend nations against potential enemy attacks were a crucial part of the interplay of defence, deterrence, and security that was such a feature of the conflict. The work of planning, the acts of imagination, and the construction of Civil Defence infrastructure were all facets of the attempt made by various states to manage and contain the uncertainty posed by the threat.  This talk focuses on the everyday experience of Civil Defence in Great Britain, presenting the history of the people who volunteered to be part of the Civil Defence system, who served in the state-sponsored Civil Defence Services between their Cold War formation in 1949 and the decision to disband them in 1968. The history of these volunteers reminds us that Civil Defence was the site of a mass mobilisation of resources during the Cold War and that despite a historiographical focus on the Cold War as an ‘imaginary’ or ‘specialists’ war, it was also a conflict that involved the public on a large scale. To interpret this ‘everyday’ history of Civil Defence in Britain, this talk will examine the meanings of voluntary participation in Civil Defence. It will discuss the roles of patriotism, belief in the utility of Civil Defence, and the role of Civil Defence as a leisure choice in shaping the nature of British Civil Defence. All of these elements were deeply imbued by the memory of the Britain’s experience of the Second World War, by ideas of Britain’s role as a global power, and assumptions about national and community belonging which cut across class, gender, and locality. Voluntary participation in Civil Defence provides way to understanding the role of the Civil Defence in people’s lives and new insights into understand the human, social dimension of the Cold War.

Cold War and warm welfare: The contribution of cultural history to the study of civil defence in Scandinavia

In Scandinavia, the postwar experience went hand in hand with the building of affluent societies with extended social welfare reforms, most often marked by strong social democratic parties. Thus, threats of ”Cold warfare” on the international stage and promises of ”warm welfare” on the home stage were two sides of the same coin. For a long time, though, the historical study of the Cold War period and the historical study of welfare societies were entirely separated research fields that hardly ever met to discuss the postwar period in all its richness and complexity. In the last ten to fifteen years, this has however changed. Perspectives and conceptual frameworks from cultural history, memory and heritage studies, and media history, to mention some, have opened up new avenues for Cold War history and how it relates to the study of late modern Scandinavian welfare societies. In this talk, I will give an overview of what kind of contributions cultural historians have made – and still can make – to the exploration of civil defence imaginaries and Cold War politics.

On March 2008 a contemporary witness monument of the recent past, which is unique in Germany, was handed over its new purpose. The former bunker of the Federal government in times of Cold War, which is situated in the valley of the river Ahr, opened its nuclear blast doors as a museum.

Sections of the bunker side are accessible for visitors, they invite young and old from all over the world.
This aspect means both challenge and responsibility for the local Heimatverein “Alt-Ahrweiler”, which personifies the maintenance of this documentation centre, because the bunker-guides accompany the visitors within the context of their approximate one and a half-hour guided bunker-tour through a subterranean world, which has been bound to maintain strict confidentiality until to the recent past.

The Federal Chancellor Konrad Adenauer has been involved since its beginning. The German Ministry of the Interior acted as central coordinator of this project. It decided in favor for two railway tunnels of the former, unfinished strategic railway through the valley mountain range of the river Ahr, after a site selection lasting for years.

These railway tunnels were extended and converted between 1962 and 1971 into the so called “Emergency Site of the Constitutional Organs of the Federal Republic of Germany in times of crisis and wartime”. A completely fortified subterranean town developed, with a length of 17336 metres, built to enable 3000 people to survive 30 days in case of nuclear attack.

An extensive documentation and many original objects at the original bunker site inform the visitors about a chapter of German history, which was a part of the global mutual deterrence of the atomic powers in the Eastern Bloc and in the Western during the era of the Cold War.

The one millionth visitor is expected in autumn 2020.

Photo courtesy of The Historical Museum of Northern Jutland.